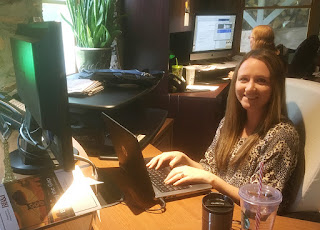 Megan Quinn is marking her two-year anniversary with the Furia Rubel team. What has she learned over those two years, and what is the best advice she’s been given? We sat down and asked her a few questions to get to know her better. Read on.

What role do you play in the Furia Rubel team?
I am on the public relations side of things here, which includes a wide range of responsibilities, from writing blog content one day to drafting press releases or pitching stories the next, then securing interviews and creating interesting social media posts for our clients.

What has been the most rewarding project you’ve worked on (or task you perform regularly) at Furia Rubel?
When I’m assisting a client with a big story by pitching their news to reporters, responding to media inquiries, and tracking breaking news stories, and the client feels good knowing that we are on their side, that’s when I feel the most rewarded.

Describe a challenge you’ve faced in the workplace, how you solved the issue, and what you’ve learned from it.
One of the biggest challenges I’ve faced was when I was pitching stories for a client and I wasn’t getting the kind of responses I’d hoped for. I had to be resourceful and think of alternative ways to reach the media. I took a step back and re-evaluated my methods and thought, what could I do better, or what haven’t I tried yet to get their attention? As soon as I started to ask myself those questions, I got more creative and found other ways to reach the journalist to whom I was pitching. The project turned into a huge success, and I’m proud of myself for overcoming that fear. That was a learning experience that helped me grow in my career.

What is the best advice you’ve been given by a parent or a mentor?
Double check everything and write down EVERYTHING.

What is one important skill anyone working in PR should have?
These are two skills, but the ability to write and to speak well are fundamental to this work. Having the ability to effectively communicate the messages that you need to get across is crucial in public relations.

Do you have any favorite quotes?
Yes – by an icon I have always looked up to, Audrey Hepburn. “Nothing is impossible, the word itself says 'I'm possible'!”

And another, by one of my public relations idols, Judy Smith: “To some degree, you need denial to get anywhere; you have to ignore the fact that the odds are often stacked against success.”

If you could go on vacation anywhere in the world, where would you go?
I’ve always dreamed of going to Paris, France someday, but Iceland looks gorgeous and that’s definitely a place on my bucket list now!

What do you like to do when you’re not at work?
Reading, watching HGTV, and going to parks for a stroll with my fiancé when the weather is nice. I’m completely drawn to the sun as soon as it’s visible, and I have to be outside.

Describe yourself in three words.
Resourceful, quirky and a spitfire.
Posted by Unknown No comments:

Visuals such as photos (and videos) are an important part of your communications plan, but the work doesn’t end once the image is made. If you are submitting that photo for publication, you have a little bit more to do.

Photos submitted to media outlets should be accompanied by clear information about who is pictured, what they are doing, and where and when the action took place. Here are the guidelines the Associated Press (and, therefore, most news outlets) follows for photo captions.

The first sentence of a caption should:
For photos created by Associated Press photographers, captions also must:
An optional second sentence of a caption can be used to give context to the event or describe why the photo is significant. Many publications do not include a second sentence, as it takes up additional space and often is subjective, rather than being strictly factual.

The structure of a basic photo caption, therefore, can be expressed as: (Noun) (verb in present tense) (direct object) during (event name) at (proper noun / location) in (city) on (day of the week), (month) (date), (year).

For example, an appropriate caption for the photo at right would be:

Note that we always recommend triple checking the factual information, including the spelling of people’s names and organizations and titles.

Having your own professional photographs to submit to publications along with your press releases, story pitches, announcements, calendar listings, articles and blog posts is more important than ever as communication continues its shift from text to visuals.

Including the correct information along with those visuals will give your submitted photos an advantage over the competition and increase your odds of having your photos chosen for publication.
Posted by Sarah Larson 1 comment: 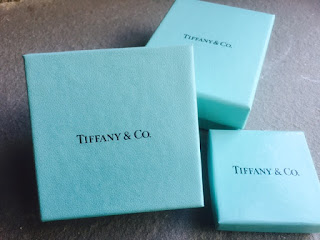 In a recent blog post, I wrote about the importance of color selection in website artwork and design, but did you know that some companies go as far as trademarking their colors? Brands need to protect themselves from competitors in their same industries trying to use their signature colors.

One of the best examples of this is Tiffany Blue. The jeweler Tiffany & Co. started using its robin’s-egg blue in 1845, when founder Charles Lewis Tiffany chose the color for the cover of “Blue Book,” the company’s annual collection of jewelry. Tiffany Blue is a custom Pantone color created for Tiffany & Co. and is not available for public use. (Pantone is a color-matching system that helps ensure that colors reproduce consistently across various printing techniques.) Not only is the color trademarked, but the boxes in which the company’s jewelry is packaged also are trademarked. Tiffany & Co. uses Tiffany Blue on everything from its advertising to its boxes and even as the background color for its website. No other brand is associated with that distinct blue, certainty no other jewelry companies. Trademark protection for a brand color helps consumers clearly identify the source of a product or service. Tiffany & Co. has protected its brand from competitors by trademarking the color blue.

Many other brands also have trademarked their colors, including AstraZeneca’s heartburn relief drug Nexium and Prilosec, which is marketed as “the purple pill.” A trademark protects the purple pill from other pharmaceutical companies using purple to sell their medication. In a recent court case, another pharmaceutical company tried to create a generic version of the drug using the same color purple. AstraZeneca sued the company and won an injunction, forcing the generic drug maker to choose a different color.

Even having a shade similar to a trademarked color could cause legal trouble for a company if it is promoting similar products and services. In 2013, T-Mobile sued AT&T for infringing upon its trademarked magenta color. A federal judge sided with T-Mobile, saying AT&T’s “plum” was too similar to T-Mobile’s distinctive hue and ordering the company to stop using magenta and similar colors in its marketing and advertising.

Choosing a color to represent your brand – whether you sell jewelry or medication or telecommunications service – carries important ramifications. Clear, consistent use of an established color palette is a vital part of building a brand, as is protecting the usage of that color within the same brand sector. What steps does your company take to ensure that its brand color is protected from competitors?
Posted by Unknown No comments:

As professionals, we are constantly learning and growing – and reading. We read a lot, and we love to share with one another articles that have caught our eye.

Here is another roundup of interesting articles that we thought our readers might enjoy.

On leadership and management

On social media and the internet

You may not be a fan of Snapchat, but a new generation of professionals is on it every day. Bloomberg reported that 10 billion videos now are viewed daily on the app that is in direct competition with Facebook which continues to enhance its video capabilities.

LinkedIn membership is on the rise, says Venturebeat.com, as is its revenue. Up to 433 million users and $861 million in revenue, LinkedIn remains a strong social media tool for business professionals.

SEO is an industry term that, for millennial marketers, is something that has been engrained in them. But for many, every solicitous email that says they can get your company on the first page of Google, cause the older generation of business owners to wonder, “can they?” The short answer is that SEO no longer works that way without a major investment in advertising dollars. However, there are things companies can do to search engine optimize their online content to rank better organically. Search Engine Watch recently published an article, How to write meta descriptions for SEO (with good and bad examples). If you’re sharing content on websites and blogs, this is a must read.

On litigation, legal marketing and the law

New Jersey lawyers beware: Attorney advertising containing “Super Lawyers,” “Best Lawyers” and similar designations must include the source of the declaration and an explanation of how the publication it arrived at that determination. When a title contains a superlative such as "super" or "best," the advertising can say the lawyer was included in that list but can't suggest that the attorney actually boasts that attribute.

On public relations, crisis communications and the media

In addition to marketing and public relations, all companies must know how to handle a crisis. There are many ways to deal with a crisis but the best way is to have a plan in place before a crisis hits. Crisis planning requires a great deal of thought and investment, but like insurance, it’s well worth it. Forbes Communications Council interviewed six executives who share their tips for managing a crisis.

On marketing, branding and graphic design

Colors, colors and more colors. There are endless variations of colors. When considering a branding, rebranding, or brand refresh, color must play into the decisions just as much as font and imagery. Entrepreneur magazine talks about what the color of your logo says about your company. We caution you to take this article with a grain of salt, as reaction to color is dependent on many factors including age, gender, socioeconomic background, culture, life experience, etc.

What have you read lately that has helped you do business better? We’d love to hear about it. Share in the comments.
Posted by Unknown No comments: