In the recent issue of Philly Ad Club’s Ad News, Jack Paolin wrote an article titled, “Cliches: They’re all around us” and I thought we could all benefit from a little refresher on the cliché terms that are used way too often.

Paolin originally got the idea to write this article based on a September 2009 column by The Philadelphia Inquirer columnist, Mike Armstrong, who criticized the use of business clichés. Here are some of the cliché terms that Paolin brought to light in his article:

Paolin said that, “The Encyclopedia of Business Clichés points out that the worst offenders use them to hide. ‘By obfuscating, lying, confusing or just planning avoiding the issue, business people can avoid communicating.’”

The real reason behind these cliché terms is that they help business people succinctly describe a concept. Paolin wrote that The Encyclopedia of Business Clichés states that clichés “are actually quite useful, because they give you precise words to describe things that would be difficult to communicate otherwise.” I agree that these terms often sum up business topics, ideas and efforts so easily and just tend to roll off the tongue nicely.

Are you an offender? I cannot say that I have not been a cliché delinquent in my day, but let’s all work to be more original and to get to the point with our everyday business language. Going forward… I mean… In the future, I am going to make a consorted effort to avoid the use of these terms in my everyday business verbiage and I propose that you do as well.

Posted by Leah Ludwig No comments:

When Twitter Silence is Golden - From The Legal Intelligencer Blog

Gina Rubel recently posted a great article titled, "When Twitter Silence is Golden" on The Legal Intelligencer Blog. To read the article, click here.
Posted by Leah Ludwig No comments:

How Corporations Succeed with Social Media

Amy Mengel of SocialMediaToday.com covered the October Inbound Marketing Summit led by social media gurus Chris Brogan and Justin Levy. During the summit Mengel picked up five key reasons why corporations are struggling with their social media efforts. But instead of focusing on negative examples of companies doing it wrong – Mengel highlighted a few of the companies that just get it. Below see the tips she mentions in her article titled, “Five reasons corporations are failing at social media.”

1. They can’t talk about anything broader than their own products. Mengel highlighted Kodak’s photography blog that Chief Blogger Jenny Cisney mentioned during the summit. Cisney spoke about how the Kodak blog is about photography and creativity in general, not about Kodak cameras. And I couldn’t agree more with Mengel when she says, “If a company is only talking online about its specific products and not looking for ways to connect to the bigger picture, it’s pretty difficult for people to be engaged.”

2. They listen to customers but don’t take any action. Corporations that are willing and able to make the plunge into the social media realm and ask for customer feedback need to be ready for public responses and to do something about it. Afterall what is the point of asking for someone’s opinion if you really don’t want to hear it.

Mengel uses an example involving Southwest Airlines. In her article she shares that, “Paula Berg from Southwest Airlines discussed how a simple blog post stating the airline was considering assigned seating amassed tons of customer comments showing a lack of support for the idea. This feedback changed the direction of their internal debate and led to a new boarding procedure that maintained the open seating arrangement.”

3. They aren’t calibrated internally with the technology. According to Mengel, a few of the summit speakers rebuked corporate Web sites for being glorified online brochures and that customers expect interaction. Similar to what Furia Rubel preaches to our clients and colleagues, summit speakers pushed the fact that content creation is key to social media success and every company should have a Web site with a content management system that allows for quick, easy content creation.

4. They’re not framing risk accurately. She also mentioned how, “NBC cameraman Jim Long said that often a company’s entry into social media is a clumsy, shotgun blast and that there’s an equal chance of looking foolish by having a ham-fisted marketing department launch a social media presence as there is if a rogue employee ‘goes off’ on Twitter. The risk of social media is not abated by not participating and social media has yet to be the undoing of any company.”

5. Their internal culture isn’t aligned for social media success. Zappos and Southwest Airlines were cited by Mengel as some of the corporations doing it right with a great social media corporate culture. Because these companies have corporate cultures reflective of their core customer service missions, they succeed with building trust and advocacy for their brand through social media outlets.

So here it is – participating in social media is not a life or death choice for corporations. Have a plan; be honest, trustworthy and transparent with your social media efforts; provide interaction with your customers; and be ready to do something about the feedback that you receive.

Thank you, Amy, for providing us with these easy-to-follow tips on bettering all of our corporate social media efforts.
Posted by Leah Ludwig 1 comment:

We finished our 2nd PR e-newsletter to be issued in the early AM (10/13). Want to sign up? Go to http://www.furiarubel.com/newsletter.php
Posted by the pr lawyer 1 comment:

As an alumna of Drexel University – I’m thrilled to learn that they had a nearly 90% pass rate on their first class to take the bar exam. Gina Passarella of The Legal Intelligencer reported today in a story titled Drexel Students Make Strong Showing in Inaugural Bar Exam.

Passarella said, “When looking at the average pass rate for all other local universities — which would include those taking the test for the second, third and fourth time — Drexel [University’s Earle Mack School of Law]’s pass rate was bested only by Temple University’s Beasley School of Law and University of Pennsylvania Law School.”

According to James B. Dougherty, Jr., Esquire, Chair of the Drexel University Alumni Association Board of Governors, and sole proprietor of Dougherty Law Offices, “These results validate the dedication and energy given to the creation of the law school at Drexel University. Starting with our late President Constantine Papadakis and continuing with Dean Roger J. Dennis, the law school initiative has filled a unique gap in legal education. The Alumni Association looks forward to supporting our new alumni from the law school.”
I can image our dear friend, Taki, looking down from a much higher post, smiling and toasting this wonderful accomplishment. Hats off to his vision and guidance and kudos to the leadership, administration and hard-working law students. Welcome to the profession. 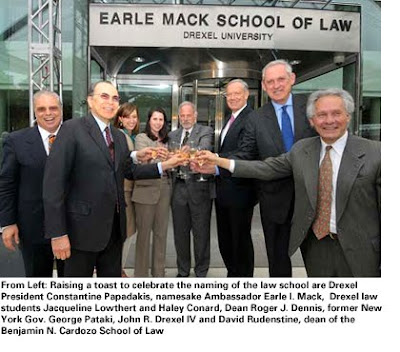 Posted by the pr lawyer No comments:

FTC Legitimizes Blogging as a Form of Media

In a recent Wall Street Journal article, “U.S. Seeks to Restrict Gift Giving to Bloggers,” writers Amy Schatz and Miguel Bustillo report on the Federal Trade Commission’s (FTC) newly released guidelines for bloggers. The guideline requires that “bloggers must disclose any money or freebies they receive in exchange for writing product reviews, a fast-growing and loosely regulated way for companies to market everything from diapers to movies.” Similar rules apply to traditional media outlets like TV, radio, newspaper and magazines.

The FTC’s guideline validates that blogging is now a form of mainstream media. It is wild to see how the blogging industry has taken off in such a short period of time and where researchers expect it to be in a few years. eMarketer estimates that as of 2009 there are approximately 27 million U.S. bloggers and by 2013 there will be approximately 37 million U.S. bloggers.

As the blogging industry continues to grow, big companies are increasingly using these forums to build buzz, sending bloggers products to review or even helping them host parties to encourage others to try their wares. Schatz and Bustillo write that the FTC is taking a stand to “protect consumers from deceptive trade and anti-competitive business practices.”

According to the Wall Street Journal article and the FTC, “Bloggers and others who are paid or give freebies to promote products online will be required to offer some sort of written disclosure for readers or face possible fines of as much as $11,000 per violation.”

Schatz and Bustillo provide an example of why the FTC is requiring these guidelines, “The FTC regulations target such bloggers as Christine Young of California, who parlayed a personal Web site detailing her experiences home-schooling her six children into a significant commercial enterprise. She is one of the Elevenmoms, a cadre of bloggers organized by Wal-Mart Stores Inc., which receives free merchandise from the retailer's suppliers, and has been flown to special events by Frito Lay, Johnson & Johnson and other companies.”

The article stirred some lively debate with commenters saying the following about the new regulations:

And according to the Wall Street Journal’s online vote titled, “Should bloggers disclose gifts or payments they receive for product reviews?” – 85.8% of the voters (309 in total) agree that bloggers should disclose information on gifts and payments that they receive.

What do you think? Should bloggers be required to disclose gifts or payments they receive from product reviews?

Posted by Leah Ludwig No comments: