The 2014 Winter Olympics – Connected and Going Viral from Russia

Are you watching the Winter Olympics? I am.

Despite all the security issues, environmental problems and the equality controversy along with other issues that have swirled through the media these past weeks leading up to the 2014 Games, I’m an enthusiastic couch potato. I am in awe of these athletes who put everything they have into their vision of winning in an Olympic sport.

Some may think I view an inordinate amount of the games. When they’re on and I’m awake, my TV is on and I’m watching or at the very least, listening. If I’m on Facebook, I’m connected to the network carrying the events and can read what’s happening in somewhat real time. Even when asleep, I’m getting push notifications sent to me through the night from an app on my phone. I wake up seeing messages about the results as they happened while I was in a deep slumber.

Social media has transformed our lives, not least of which is the way we get our news. News events, sports results and weather updates come much faster than ever before. So, it comes as no surprise the events at an international location such as the Sochi Olympics would be broadcast via social media channels. If you’re a fan like I am, you need to beware of spoiler alerts!

London was said to be the Twitter Olympics while the Sochi Games are being described as the viral Olympics in this article from USAToday. Did you catch that face of Ashley Wagner when she was given her score last weekend during the team event? Well, it’s gone viral around the globe.

Not only are journalists using Twitter to send messages out at the games, but the athletes themselves are keeping in touch with their family, friends and fans. Speak another language? Don’t despair! For those athletes trying to send out tweets in other languages, a translation company from Israel is willing to do it for you in an hour! One Hour Translation is offering to translate tweets into any one of 75 languages.

As a big fan of skating, I was watching U.S. figure skater Jason Brown performing his short program. Although he has not won a medal individually, (he’s only 19, so he’ll be back) he’s won the hearts of the audience. Brown entered the Olympics as a viral personality on social media with his U.S. Championship Riverdance routine hitting more than 3 million views in ten days. 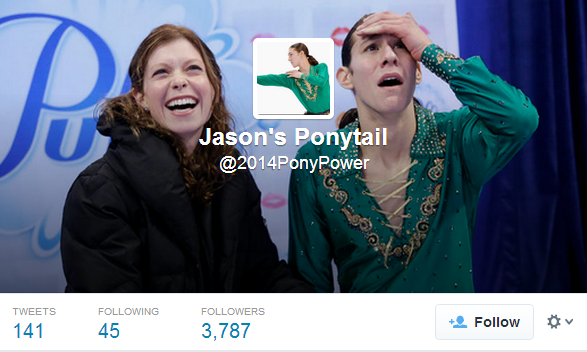 There seems to be some humorous commentary over skaters’ hair during these broadcasts, as Brown has a ponytail and Canadian figure skater, Kevin Reynolds wears his locks in a sort of bed-head style. Both have Twitter accounts. Wait, maybe that’s not clear enough. Both hair styles have Twitter accounts. @PonyTailPower and @KReynoldsHair are both on the social media site. Currently Brown has more than 2700 followers where Reynolds has a bit further to go with nearly 250. 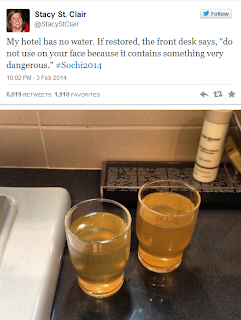 Not all is fun and games with social media at the Olympics. These athletes are in Russia after all, and between the Russian government and the International Olympic Committee, there have been restrictions enacted as described here in this article by Taylor Soper for GeekWire.

Journalists are however, live-tweeting all the Olympic action including the manholes without covers, dangerous water running out of their hotel faucets and the volunteers trying to save Sochi’s stray dogs as in this article on Storify by Tanita Gaither.

With as much Olympics as I watch, I can’t do a blog post without discussing commercials and their social media presence. After the Super Bowl, Olympic advertisements are probably the some of the best spots there are, but they’re played over and over and over. However, there is a trend of storytelling going on this year. Proctor and Gamble has been doing a series of “Thank You, Mom” ads that are about the mothers behind the athletes - one of which has garnered more than 16 million views on YouTube.

There’s no denying our lives have changed with the invention and ongoing development of social media. All this is a great example of some tremendous marketing, a faster way to get a message to more people and a way for those using these methods for information-seeking to get instant gratification. Do you use Twitter, Facebook or phone apps to be connected to the Olympic action or March Madness or other highly publicized events?