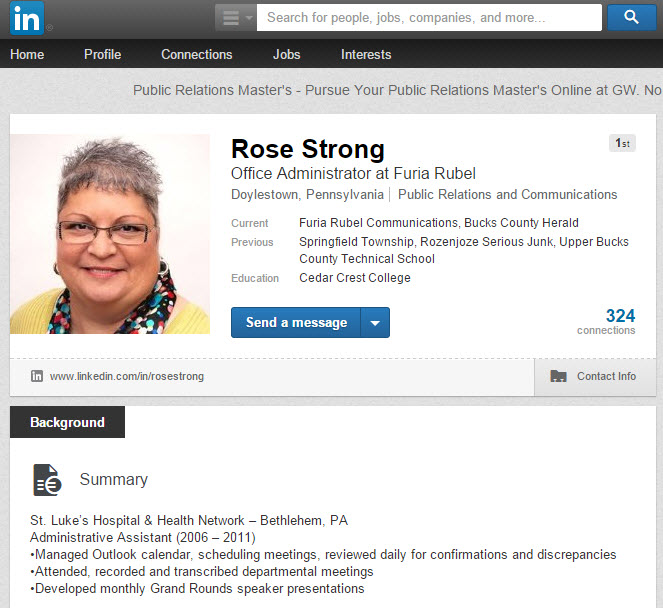 Did you know that the likelihood of your LinkedIn profile being viewed is 11 times higher if you have a profile photograph of yourself than if you don’t?

In today’s technological business world, it’s been said that a website is a company’s front door. If that’s the case, then LinkedIn must be the window through which we are seen as employees, employers, recruitment managers, and business networking opportunities.

By the end of 2014, the social network had 347 million members, according to Statista.com, The Statistics Portal.

According to the marketing site, ExpandedRamblings.com, LinkedIn reaches more than 200 countries and territories and is available in more than 20 languages. The site draws about 187 million unique visitors and more than 40 percent of them log onto the site each day.

With that widespread influence in mind, let’s get back to the photo. Don’t like to have your picture taken? A bit squeamish in front of the lens? Or do you fall the other way and turn into a ham or have a few crazy shots of yourself drinking from the keg hose at the frat party? Having a photo is important, but using the right ones and knowing the damage the wrongs ones can cause is imperative (take that frat party picture down ASAP) to you being taken seriously in the business world.

Just recently, I sent an invite to connect with someone on LinkedIn and suddenly got a screen of headshots or silhouettes of people I might know and may wish to connect with. I caught myself ignoring the blank ones and focusing only on the ones with photos. I’m not a career coach or hiring manager, but some of the photos I saw were clearly not advantageous to the folks’ professional profiles.

One was a selfie taken on a plane. Really? In plain view were the overhead luggage compartment and the head rests of the seats behind the person staring out at me.

Several profile photos were of people being interviewed or filmed by local media or even a cover shot of a magazine. I know it may seem impressive, but all the viewer sees is the distraction of the news people, camera or microphone or the magazine cover.

Pets in photos, yea or nay? There were more than a few of these. If you’re the executive director of the city humane society or president of the region’s farm animal rescue,  a tasteful photograph with a relaxed animal may be appropriate. However, cuddling your Bearded Dragon lizard or Asian Box Turtle or letting Polly your Rainbow Lorikeet sit on your shoulder may not be quite the image you wish to project.

Spouses in the same photograph won’t do anything to showcase your individuality and strengths. Although you may love one another and work together, you’re not joined at the hip; you each have something to offer the world. Stand out on your own, with an individual profile and a photo.

Glam shots in your wedding dress, gazing pensively out the window or your long, flowing hair covering one eye with your head tilted just so, aren't the shots of someone moving up the corporate ladder.

If you’re trying to do something different, that’s okay, but you want to stand out and be the center of the viewer’s attention, not a distraction. Your credentials may be stellar, but that view of your photograph can make or break what someone thinks in those first few seconds.

The old cliché that you only have one chance to make a first impression rings true even on social media. For more guidance on choosing the appropriate image, this article by Tommy Landry for Business2Community.com gives some excellent tips on how to make the most of your LinkedIn profile photograph.
Posted by Unknown

Rose, I couldn't agree more. Unless I know someone well, I prefer not to connect with people who have not taken the time to post a professional (or at least professional-looking) personal image.