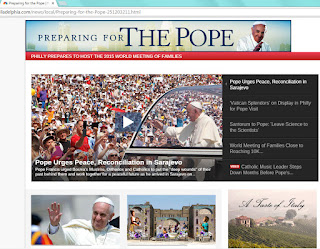 As a non-Catholic, I am still fascinated by Pope Francis and interested in his visit to the city of Philadelphia in September. The numbers are staggering, with 15,000 visitors attending the conference and 10,000 volunteer greeters and representatives expected in the city during the week-long World Meeting of Families. Even more incredible is that more than 1.5 million people are expected to stand on the Benjamin Franklin Parkway for the Pope’s Sunday Mass.

Our media connections have alerted us that advertising space in and around the city will be at a premium during the Pope’s visit. Can you imagine your ad on a SEPTA bus tail or transit sign during that time? Or better yet, how about a digital billboard on one of the major routes into the city? But you also have to look at what you are selling – with visitors from 150 nations, are you really getting the most for the extra money you would be spending to advertise during that time period? If you are someone like Coke or Pepsi, probably, but local businesses might be better waiting until after the hoopla and spending their budgets to reach a more local audience.

In a way, this seems like a perfect example of old-fashioned advertising opportunities for local businesses. Shops and event planners are joining forces to name special food items for the Pope’s visit, such as the #PopeinPhilly milkshake the Potbelly Sandwich Shop created in partnership with Archbishop Vincenzo Paglia who recently visited the city to plan for the event. The city will be buzzing with souvenirs on street corners and in shops and local establishments running sales with some type of reference to the pontiff’s visit.

Area colleges and universities are asking students to volunteer and, of course, will use photos and stories about their students in their public relations and social media outreach during the month. But on the advertising side of business, those same schools will be competing for advertising space within the city and surrounding suburbs. Late summer and fall are busy recruiting times before enrollment applications are due, and the schools may end up paying premium prices this year. For larger schools in the area, the extra advertising money spent may attract “out-of-town” students that wouldn’t normally have seen those schools as an option.

Whether you are Catholic or not, you have to be impressed by the amount of planning and organization necessary to run this type of event. The media coverage, the advertising and the social media buzz around this is already massive, as the event planners are sending out press releases almost daily. So join in the fun, buy an “I love the Pope” mug and enjoy a history-making event for Philadelphia.