Rainbow Flag: Logo, Symbol or Both? 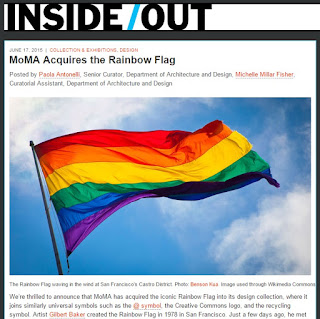 June was Gay Pride month, and how appropriate for the Museum of Modern Art to add the rainbow flag to its collection in the same month that same-sex marriage was legalized across the nation. Rainbows have been everywhere these past couple weeks, along with the hoot and holler of pride after the landmark decision was handed down by the U.S Supreme Court.

Whether you agree or disagree with the SCOTUS decision regarding same-sex marriage, you can’t go through a day right now without seeing a rainbow flag flying on social media, in storefront windows and above some buildings throughout major metropolitan cities. In fact, Facebook set up a filter for profile photos and Instagram and Twitter have had a plethora of brands posting photos with their products and the flag and supportive commentary. In addition, there are the bumper stickers, T-shirts and even landmarks lit up in rainbow colors in the wake of the SCOTUS decision.

In the wake of all the hype, have you ever wondered how the rainbow flag came to symbolize gay pride? 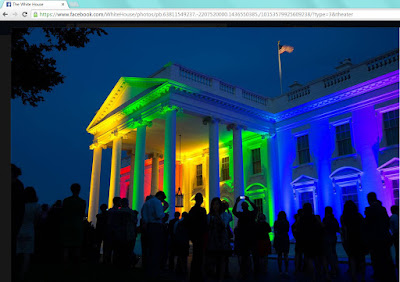 Prior to the rainbow flag, a pink triangle often was used, which was originally a symbol created by the Nazis to indicate one as a sexual deviant or homosexual in concentration camps. (Sadly, even after the Nazi defeat and concentration camp liberation, LGBT people were imprisoned for more than two decades longer because of the laws imposed upon them.) The pink triangle was co-opted by the LGBT movement throughout the 1970s and 1980s, but many argued that the symbol had disturbing implications and understandably wanted to do away with it.

So the triangle was scrapped and replaced by a flag in simple, bright rainbow colors as a symbol of LGBT pride. It was created by Gilbert Baker in 1978. He began the process just before the U.S. Bicentennial in 1976, inspired by the increased number of American flags being flown to mark the country’s 200th birthday. Baker, an artist and drag queen, told the Museum of Modern Art in an interview:

“And I thought, a flag is different than any other form of art. It’s not a painting, it’s not just cloth, it is not just a logo—it functions in so many different ways. I thought that we needed that kind of symbol, that we needed as a people something that everyone instantly understands. [The rainbow flag] doesn’t say the word “Gay,” and it doesn’t say “the United States” on the American flag but everyone knows visually what they mean. And that influence really came to me when I decided that we should have a flag, that a flag fit us as a symbol, that we are a people, a tribe if you will. And flags are about proclaiming power, so it’s very appropriate.”

When Baker rationalized it, without knowing, he pretty much did what any branding agency would be doing in the process of developing reasoning behind the creation of a particular logo or brand. In fact, at Furia Rubel Communications, we often develop brands (a.k.a. symbols) for our clients. We brainstorm about what would be the best logo or symbol to capture the attention of the target audience, and we conduct strategic planning, focus groups, surveys and research to shape the image that will best speak about the client or cause that we represent.

Baker made his first flag with about 30 volunteers, after being asked for one by his friend, the late Harvey Milk, a San Francisco Board of Supervisors member and the first openly gay politician in a large U.S. city, who wanted it for a march he was coordinating. The original flag had eight colors: hot pink, red, orange, yellow, green, turquoise, indigo and violet. Each color has a specific meaning. In creating the flag for retail purchase, Baker was told the color dye needed to create the hot pink was too expensive, so it was removed.

Other symbols throughout LGBT history have been adopted to educate the public and stir pride in the LGBT population – a population whose individuals often have had self-esteem ripped from them from schoolmates, families and even strangers, over the course of their lives. Today, many of these symbols may be seen at gay pride festivals, in LGBT publications and on social media, but some may be unfamiliar to the general public. Even to gay men and lesbians, some of these symbols require explanation.

Was there a symbol you didn’t know, but were curious about?
Posted by Unknown