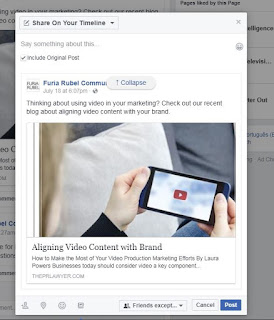 Big changes from Facebook took effect the week of July 18. In order to combat the ongoing spread of misinformation, Facebook has changed the way users can edit the previews of links that they post to the social media platform.

This latest update from Facebook eliminates the ability to customize link metadata, which determines the headline, description, and image shown in the preview of the link.

According to an article by Engadget, the preview function has been abused by many fake news outlets, which “have been taking advantage of the ability to customize a story's metadata to spread misinformation.They often replace the headline, image and snippet with something controversial to get the most shares, likes and comments possible." This change allows Facebook to eliminate at least one method of disseminating false information.

The social media platform recognizes that legitimate publishers and content creators rely on the customization function to tailor their shares in order to improve audience engagement, and Facebook developers have been working on a solution for them. In the meantime, content creators can continue to customize how links appear with Open Graph meta tags. Open Graph meta tags are an important option to consider to optimize content on social media.

Overall, this change signals a serious commitment from Facebook to curb the spread of false information. Shortly after the 2016 election, Facebook founder Mark Zuckerberg announced an initiative to stop fake news. The elimination of the ability to alter link previews appears to be one of many steps the social media giant is undertaking to achieve that goal.