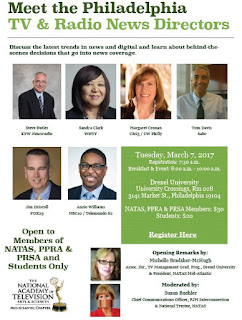 Last week, I had the opportunity to attend a panel with some TV & radio news directors in the Philadelphia market. The event was hosted by the National Academy of Television Arts & Sciences Mid-Atlantic Chapter and Drexel University. The panel was moderated by Susan Buehler of PJM Interconnection and the speakers included:


The panel members' discussion ranged from their goals as news directors to their career trajectories and their advice for young broadcast journalists. Each of them provided rich insight into their motivations as journalists and how their production and reporting teams are dealing with the ever-evolving media landscape.

An event bringing together six competitors in the country’s 4th largest media market was an interesting dynamic to begin with. But it soon became clear that they actually had many things in common. As news directors, they are responsible for the strategy and journalistic integrity of their stations. Each cited the same motivation – providing a public service and telling people’s stories.

But, certain differences, such as the allocation of resources, sets Clark, VP at a public media affiliate, apart from the others on the panel who have the resources of major network affiliates at their disposal. Despite a challenging media landscape, the panelists are more willing than ever to provide local audiences with the honest and informing stories they need and want.

When asked about digital media trends, the panel members were generally positive. Tom Davis talked about how 6ABC uses social media for brand enhancement and Cronan echoed that sentiment by talking about brand consistency in social media. In the radio space, Clark talked about how important podcasts have become to WHYY’s success. Butler also discussed how he was hopeful about digital media and that he was doing the most hiring for social media positions at KYW.

Some of the news directors also talked about some of the digital tools they use for stories. Driscoll uses Fresco, an app for citizen journalists, to curate footage of events. Williams uses Banjo, a news aggregator, to stay on top of up-to-the-minute happenings in the Philadelphia area.

So with all this in mind, the news directors had some helpful tips for PR professionals to consider when pitching: