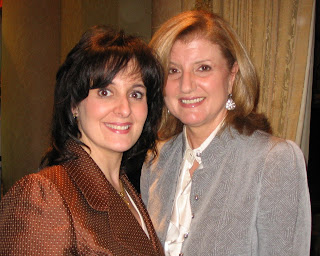 I had the wonderful opportunity to chat with Arianna Huffington, co-founder and editor-in-chief of The Huffington Post, today at the Philadelphia Bar Association Quarterly meeting. Arianna served as the keynote speaker. I found her to be witty, energetic, and thought-provoking. In reference to the economic crisis – she referred to an analogy that made more sense than anything I’ve heard to date. Referring to Wall Street leadership, she said, “If a school bus driver was driving a bus blindfolded and totaled the bus – you wouldn’t give him another one.” Certainly makes you think.

Sayde Ladov, Chancellor of the Bar Association opened the program and recognized the Immediate Past Chancellor, Michael A. Pratt, for his leadership of the Association in 2008 and his diversity initiatives. Sayde also announced that the Law Practice Management Division, an initiative of former Chancellor, Alan Feldman, has received a national award for its work.

Mayor Michael Nutter also spoke about the City’s deficit. But that’s not what the Philadelphia media wanted to talk with him about. Reporters from Fox29, NBC10 and the Inquirer were all on hand to get a statement about the city’s demand for the $8 million raked in by the Eagles Skybox at Veterans Stadium from the 2000 and 2001 seasons. What’s being reported by NBC10 is that our beloved “Eagles won’t pay up, claiming the city is at fault for their losing $8 million when the 2001 pre-season game was canceled due to turf problems.” Another public relations headache for the City and our Eagles.

Fortunately, Arianna was not put in the middle of Mayor Nutter and Jeffrey Lurie – but if she had been asked to comment, I’m sure her charm would have shown through.

A nationally syndicated columnist and author of twelve books, Arianna Huffington is also co-host of “Left, Right & Center,” public radio’s popular political roundtable program. In May 2005, she launched The Huffington Post, a news and blog site that has quickly become one of the most widely-read, linked to, and frequently-cited media brands on the Internet. In fact, in 2006, she was named to the Time 100, Time Magazine's list of the world’s 100 most influential people. Originally from Greece, she moved to England when she was 16 and graduated from Cambridge University with an M.A. in economics. At 21, she became president of the famed debating society, the Cambridge Union.
Posted by the pr lawyer