I had the pleasure to attend the Pennsylvania Conference for Women (www.PAConferenceForWomen.org) in Philadelphia. There were a lot of great nuggets to digest and wonderful women to meet. Here are some of the highlights:

Poet, mother, professor and national and international lecturer on black culture and literature,
Sonia Sanchez, was one of the highlights of my day. She started her presentation by singing to the audience. This woman of tiny stature filled the room with abundance, reflection and joy. Some of the things she said that inspired me were:

•Never give up on love.

•A long walk of “herstory” and of history is worth putting all else aside.

•Listen to the lessons taught of your elders – they can be earth shattering.

Cheryl Strayed (@CherylStrayed) is the author of the critically acclaimed novel “Torch,” and memoir “Wild: From Lost to Found on the Pacific Crest Trail,” chosen by Oprah Winfrey as the inaugural title for Oprah’s Book Club 2.0. Her stories and essays have been published in The New York Times Magazine, The Washington Post Magazine, Allure, The Rumpus, The Missouri Review, The Sun, The Best American Essays and elsewhere.

•We all have to bare the unbearable.

•We all seek the spiritual journey and learn that it lives within us - we just have to find it. 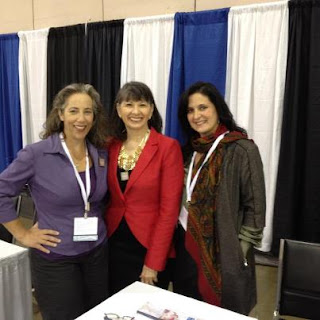 Gloria Feldt (@gloriafeldt ) is a bestselling author, keynote speaker, world changer and expert in women’s relationship with power and leadership. Her latest book, “No Excuses: 9 Ways Women Can Change How We Think About Power,” reveals how women can reach parity from the boardroom to the bedroom for good—our own and society’s. I attended her breakout session with my friend, an artist, singer-songwriter and creative thinker, LisaBeth Weber (@lisabethweber), who knows Gloria well. Gloria’s program was all about how women can think about, redefine and embrace power. Here are some of the points she made:

•Women dance with power - we sometimes crave it and sometimes don't - we have less intention and desire for power as a whole than men. In fact, women lose $500,000 to $1 million in our lifetimes because we fail to value our services and negotiate effectively as a whole – this needs to change.

•Women need to redefine power from "power over" to "power to" in order to embrace and seek power. Then, define our boundaries, speak up, set our intentions and make change.

•The resources women need to be successful once we embrace power are courage, strength, confidence and the ability to acknowledge our powers.

•Power Tools: know our history, define our terms, use what we have, embrace controversy, carpe the chaos, wear the shirt, take action, employ every medium, tell our story.

•Women can lead and live without limits.

•If you want your voice heard as women, write op-eds – we cannot be heard if we don't speak up. She referenced the OpEd Project (www.theopedproject.org) and encouraged all women to check out the website and get involved.

The second and diverse breakout session was moderated by Bonnie St. John (@bonniestjohn), a television and radio personality, mother, business owner, amputee who became the first African-American to win Olympic or Paralympic medals in ski racing, and the author of six books. The others were: Alba Martinez, a Puerto Rican powerhouse who has served as the CEO of the United Way of Southeastern Pennsylvania, the commissioner of the Philadelphia Department of Human Services (DHS), and now serves as a principal in Vanguard’s Retail Investor Group; Judith von Seldeneck, a Texas-born woman, and CEO of Diversified Search, a founder of the Forum of Executive Women and former executive assistant to Vice President Walter F. Mondale; and Cindy Gallop (@cindygallop), an Asian Brit and founder of www.ifwerantheworld.com personifies energy, power and raw-honesty. She opened saying, “I like to blow shit up.” I could have listened to these women for hours. Their diversity of ethnicity, experience, counsel and accents added to their great perspective and excellent advice. They said:

•Overconfidence and under-confidence are equally as damaging if not properly managed.

•Learn to leverage your network and don’t be afraid to ask for what you want.

•Women leaders need to take a stand on things like integrity - stand up for what you believe in and be accountable.

•Be proud to be a woman! Wear bright colors not men's suits. Stand out in the room.

•Top-down structures, who wins, status and how one matters are the traditional models of male-driven businesses. Instead, business structures need to be redefined around how women lead and manage – we have the potential to create a better business world.

•Biggest mistake I've ever made is not firing someone fast enough (in all contexts).

Arianna Huffington (@ariannahuff) was one of the day’s keynote speakers. She was both authentic and entertaining. I first met Arianna at a Philadelphia Bar Association luncheon several years ago and had the pleasure to see her again at the PA Women’s Conference. She is the president and editor-in-chief of the Huffington Post Media Group, a nationally syndicated columnist, and author of thirteen books. Originally from Greece, she shared the story that she moved to the United States to get away from a love relationship that was not going to end in marriage – which was the start of her journey to become one of TIME magazine's list of the world’s 100 most influential people.

•If you think you are too small to be effective, you have not spent the night in bed with a mosquito.

•Sleep your way to the top – literally.

•Women need to define success in a way that honors us - it's not the male definition of climbing the ladder.

•All people imagine the possibility of tragedy and failure but negative fantasies are unnecessary and draining.

•Biggest fear for women is fear of failure but failure is a steppingstone to success.

Cindy Gallop (@cindygallop) also presented a breakout on How to Redesign Your Work to Fit Your Life. She has a background in brand building, marketing and advertising, Cindy has a reputation as a highly compelling and inspirational speaker. She is a passionate advocate for women in business and agrees with Madeleine Albright’s sentiment that, “There is a special place reserved in hell for women who do not help other women.” Here is what she had to say:

•Tweet with the hashtag #changetheratio when women are unrepresented. We need to create the change we want in the world.

•If you articulate it, you can make it happen.

•Those people who say it can't be done should get out of the way of people doing it!

•Well-behaved women rarely make history! You have to buck the system.

•There is a formula for business success: hire only the best, provide them with a clear vision, let them succeed, demonstrate your appreciation and share the success.

•When it comes to setting up businesses, everyone defaults to the corporate norm instead of being innovative. Don't do business the same as everyone else. Collaborative competition means status quo. Set yourself apart.

•If you want to predict the future you must invent it.

•A business plan can be anything you want it to be as long as it says how you are going to make money.

Posted by the pr lawyer

This is a great recap. When Arianna Huffington was speaking about redefining success she said one of my favorite lines of the day. "Success is not a ladder; it's a jungle gym."

I heard her say that Jessica but I didn't capture if fully so I'm glad you shared it here. Your round table was excellent too. I am so glad I jumped in mid way! It was great to see you! We have to do some programs together.