The Press Release Mistake You Need to Stop Making 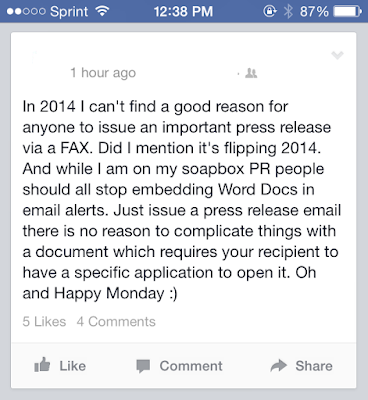 Years ago, a press release was written and then carefully formatted on a sheet of letter paper, usually official stationary of the company or group sending the release. It had headers and footers and logos and salutations. It often was printed and either faxed or - gasp - mailed.

It was no surprise, then, that when email took over prominence as the main form of business communications, many organizations continued to follow the same procedures and then, instead of printing or faxing, simply emailed the document as an attachment.

If your organization still is sending out press releases this way, there are good reasons you should stop. As a matter of course, Furia Rubel sends press releases to media contacts in the body of an email, not as a separate, attached document. Here's why:


As you can see by the complaint posted on Facebook (above) by a journalist friend, these might seem like little things, but they annoy journalists - mostly because they make their work lives harder - and an annoyed journalist is far more likely to skip over your message completely.

Sending a press release as text copied into the body of an email is an easy best practice that you can implement right now, to increase your organization's chances of catching the interest of the right people.
Posted by Sarah Larson