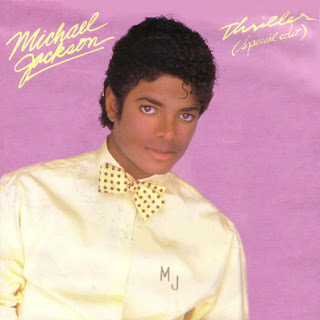 Less than two hours after TMZ reported that Michael Jackson had died, there were nearly 4,000 news stories reported internationally on Google - and these are just the sites crawled by Google.
Flash back 29 years and I still remember hearing the news of John Lennon's death on the nightly news in 1980 - my mother was crying and I didn't really understand what his death meant. There was no question of his death - it was official. Three years prior -- the print, radio and television headlines were dominated by the death of Elvis (I still have the locket my mother gave me commemorating his death). 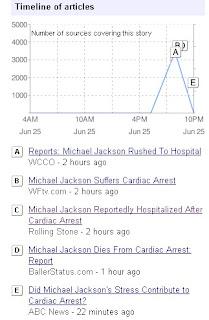 But today, I learned of the news after posting an article to Facebook about my public relations agency. I happened to notice that TMZ reported Michael Jackson had died. I posted on my status: "Is it true, did Micheal Jackson die?" And the responses were "yes", "No" "he's in a coma", "not sure", and "OMG." I turned on Fox News - they were at the hospital but it had not been confirmed. I turned on CNN -- there were at the hospital and at his home but it had not been confirmed. Twitter was buzzing about MJ's death and still, the news outlets had not "confirmed his death." Then I saw on Facebook that Farrah Fawcett lost her battle with cancer too. And still, the television news outlets had not confirmed Michael Jackson had died.
This all makes me wonder about the future of breaking and delivering news. Is it even possible for newspapers to "break" news stories? What about television? TMZ online had the story - broke it- Twittered it - and shared it all before news cameras, crews, and journalists had a chance.
Yes -- print run headlines on the cover tomorrow of the loss of two universal icons. Jackson will upstage Fawcett. Scandals will break. Speculators will speculate. Monthlies will look for new angles for cover stories.
And tonight, I told our children that they'll remember today (the day that Michael Jackson died) many years from now - just like we remember when Elvis and Lennon died. All universal icons - love 'em or hate 'em.
I'll remember not only that he died, but how the story was reported. News reporting and breaking news has changed forever just as Michael Jackson changed the music industry. I even remember the world-wide debut of Thriller.
Posted by the pr lawyer