Last night I had the great honor to participate in the Portrait Dedication Ceremony for the late Honorable Lisa A. Richette She was honored on September 11, 2008 (her birthday) at the Honorable Nicholas A. Cipriani Family Court Building in Philadelphia. 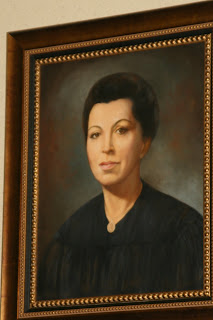 Judge Richette graduated as the first Italian American woman from the University of Pennsylvania and in 1952, she graduated from Yale Law School. One of Philadelphia’s most well-known advocates for children and a true forerunner of child welfare and juvenile justice.
In 1969, Judge Richette authored a book entitled, “The Throwaway Children,” about the juvenile justice system in Philadelphia. Judge Richette served on the Bench in Philadelphia from 1971 until the time of her death, October 26, 2007. In 2000, she was presented the first “Outstanding Women in Law Award” by the Justinian Society. The award has since been named after Her Honor.
The reception included tributes by The Honorables Kevin M. Dougherty, C. Darnell Jones, III; Abram Frank Reynolds, and Anthony J. DeFino. I also presented along with attorney Roberta D. Aversa. Immediately following the unveiling, the portrait was hung in Courtroom E, the room where Judge Richette last presided. 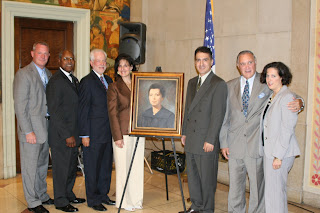 Email ThisBlogThis!Share to TwitterShare to FacebookShare to Pinterest
Labels: Philadelphia